The array variable is a type of variable which enables you to store multiple values of the same type.

UiPath Studio supports as many types of arrays as it does types of variables. This means that you can create an array of numbers, one of strings, one of boolean values and so on.

Example of Using an Array Variable

To exemplify how you can work with array variables, we are going to create an automation that asks the user for his first and last name and age, stores the information in an array and then writes it in a .txt file.

We use a string variable and not an integer to store the age, so that we do not have to convert it later on, when we add it to the string array variable.

If the file does not exist at the provided path, it is created.

By adding the index number of the array items you can access their values and write them, in this example, to a text file.

The final project should look as in the following screenshot. 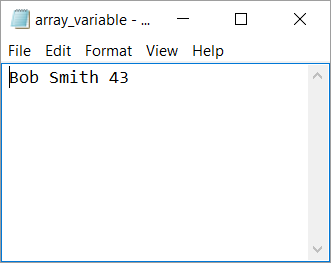