This functionality is available only in personal workspaces.

To accommodate automation projects with multi-account connections, we implemented a new feature that allows personal workspace owners to see those accounts and specify one for launching the job. You can change the account on the Package Requirements tab when creating a process or editing an existing one. A drop-down is available for each connection with multiple accounts allowing you to see the entire list of available accounts and change the active account as needed.
To manage your connections or add new ones, you can jump to Integration Service by clicking the button. 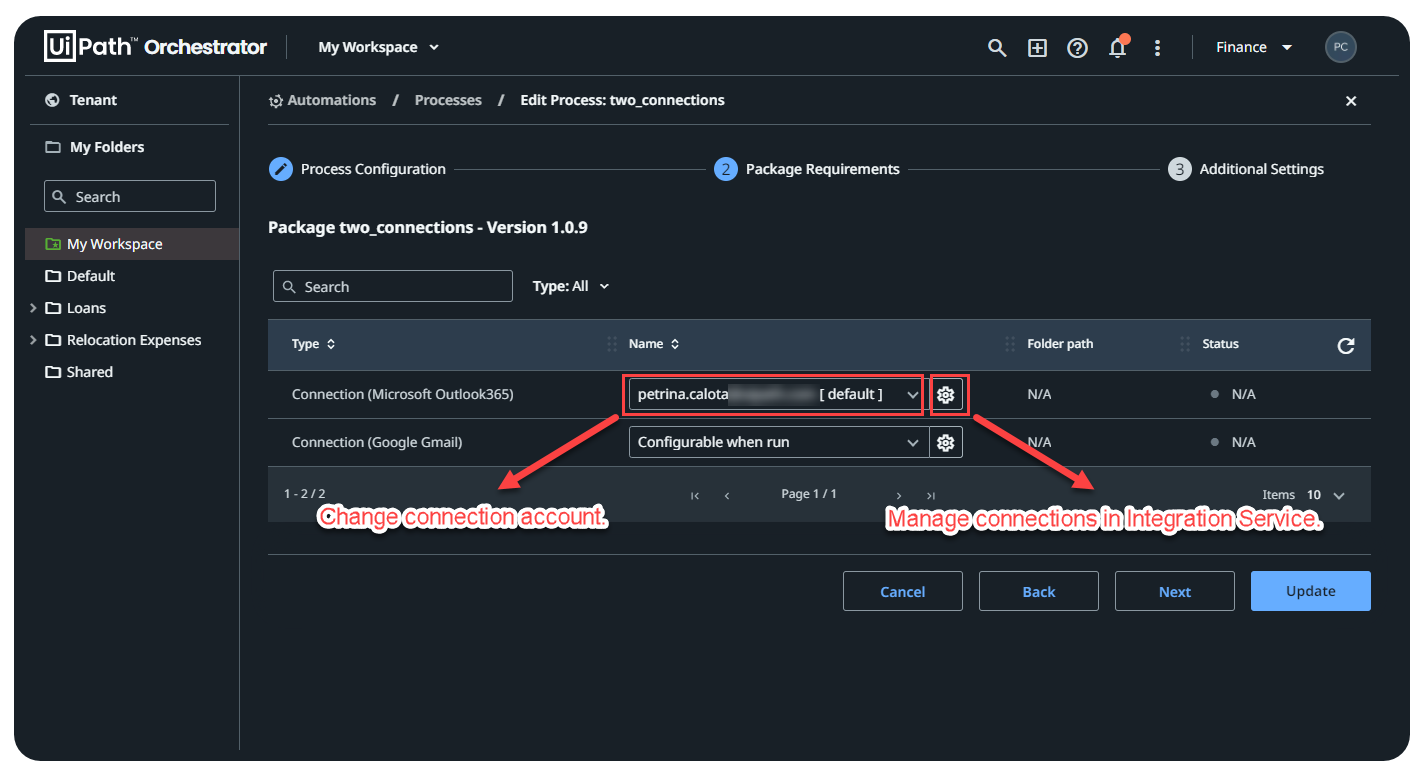 Learn about connections in the Integration Service guide.

Here are the places in the Orchestrator UI where you can see the changes in how we compute the last login time for your users:

You can now authorize API calls in the Swagger UI using OAuth2.
See how to obtain an access token, send requests or revoke access.

This feature is only available to Community users.

Ever wondered how your life would look if you didn't have to worry about the infrastructure on which your automations are executed?
In the past couple months, we have made it our number one priority to make it happen and today we bring you UiPath Automation CloudTM robots - Serverless, or Cloud robots - Serverless for short.

Serverless cloud robots make it easy to run background automation without worrying about the necessary infrastructure. They provide you with complete freedom from provisioning, managing, maintaining, and scaling any underlying infrastructure. UiPath handles all the work behind the scenes so you don't have to deal with containers, virtual machines, or physical servers.

See details about Automation Cloud robots - Serverless and instructions on how to set them up.

A new endpoint is now available in the Orchestrator API for assigning roles or overwriting the assigned roles for an existing account:
POST /odata/Users({key})/UiPath.Server.Configuration.OData.AssignRoles

This endpoint is improved compared to our existing Users endpoints because it assigns roles based on the role ID as opposed to the role name, making it more reliable.

You can find the new endpoint in the Swagger of the Orchestrator API, available at <OrchestratorURL>/swagger.

With the other recent improvements to roles (details here and here), which resulted in the renaming of some roles, any API calls that refence a renamed role need to be updated to use the new role name.

Affected endpoints
The following requests can assign a role based on the role name:

To address this issue, you can use the new endpoint to assign roles based on the role ID instead of the role name.

There are two ways in which you can update your integrations that were affected by this change so that they work as expected:

A. Add a second API call (recommended)
You can leave your existing API requests as they are but follow each call that assigns roles with a call to the new endpoint to overwrite the assigned roles with corrected ones.

For this remediation method: you need to identify impacted requests in your integration and then, for each identified request:

This ensures that any roles that the impacted request you identified would have assigned are immediately overwritten with the correct roles.

B. Update role names
An easier but less efficient remediation method is to update the impacted requests with the new role names.
While this method is easier, we recommend that you consider using the previous method instead because it hardens your integration against any subsequent changes to role names.

For this remediation method, you need to identify impacted requests in your integration and then, for each identified request:

Because of the recent changes and because we want to retain our ability to update roles in the future without impact to you, we are announcing our intention to deprecate the use of the role name property in the Orchestrator API.

We will continue to support this property for a minimum of 6 months from now.
However, we recommend that you begin transitioning to use the new endpoint for assigning roles to avoid breaking changes following deprecation.

We have increased the maximum number of characters allowed for role names from 32 to 64 characters.

Erratum 02 November 2022: The payload of the jobs.created webhook for Test Case now displays the specific robot ID and the machine used for the job run.