This feature allows administrators to update Robot, Studio, and UiPath Assistant clients to newer versions from Orchestrator. This provides an easy way to deliver a version update to a large base of machines from a centralized location, helping remove user friction and streamlining the update process.

Components that take part in the update process

As an administrator, you can choose the specific version to be deployed on a specific machine.

To be ready to receive an update, a product must be in a neutral state:

During the update process, the Robot does not start any jobs until the update is completed.

In the attended scenario, an update prompt is displayed giving the user two options:

In the unattended scenario, the update service confirms that the client app is in a neutral state (as described above) before sending the confirmation back to the update server.

If there are any processes running on the machine, the user is prompted to choose to either stop the process, or wait for it to finish and continue with the update. If a Studio session is open, the user is prompted to save the progress.
If the user doesn’t react, Studio closes and the process is saved as-is at that time and can be recovered after the update is completed, while the Robot waits for any process to complete and starts the update process afterwards.

The update process is split into seven stages:

During the update process, if the file cannot be retrieved in the first download, the update service retries three more times. The retry intervals are: one hour after the initial attempt, then two hours after the first retry, and four hours after the last retry. Before each retry, the user is informed through the notification system.

For each download attempt, the logs are added to the Orchestrator update logs and locally on the machine in the %localappdata%/Uipath/UpdateService/logs file.

The process is similar for installing, meaning that if the first install fails, the update service tries again three times with the same frequency (one hour after the initial attempt, then two after the first retry, and four hours after the last retry).

The update server waits 72 hours for the update to complete since it started. If the new version is not installed after this interval expires, a detailed error is added to the logs. The update is retried the next time a request is received.

The technical aspects on the server side are identical for both service-mode and user-mode deployments, as they use the same connection type between the update server and update service. The difference consists in how the Robot service communicates with the update service on the client machine, as explained below.

In service-mode deployments, the robot service and update service both run in the local system account session. 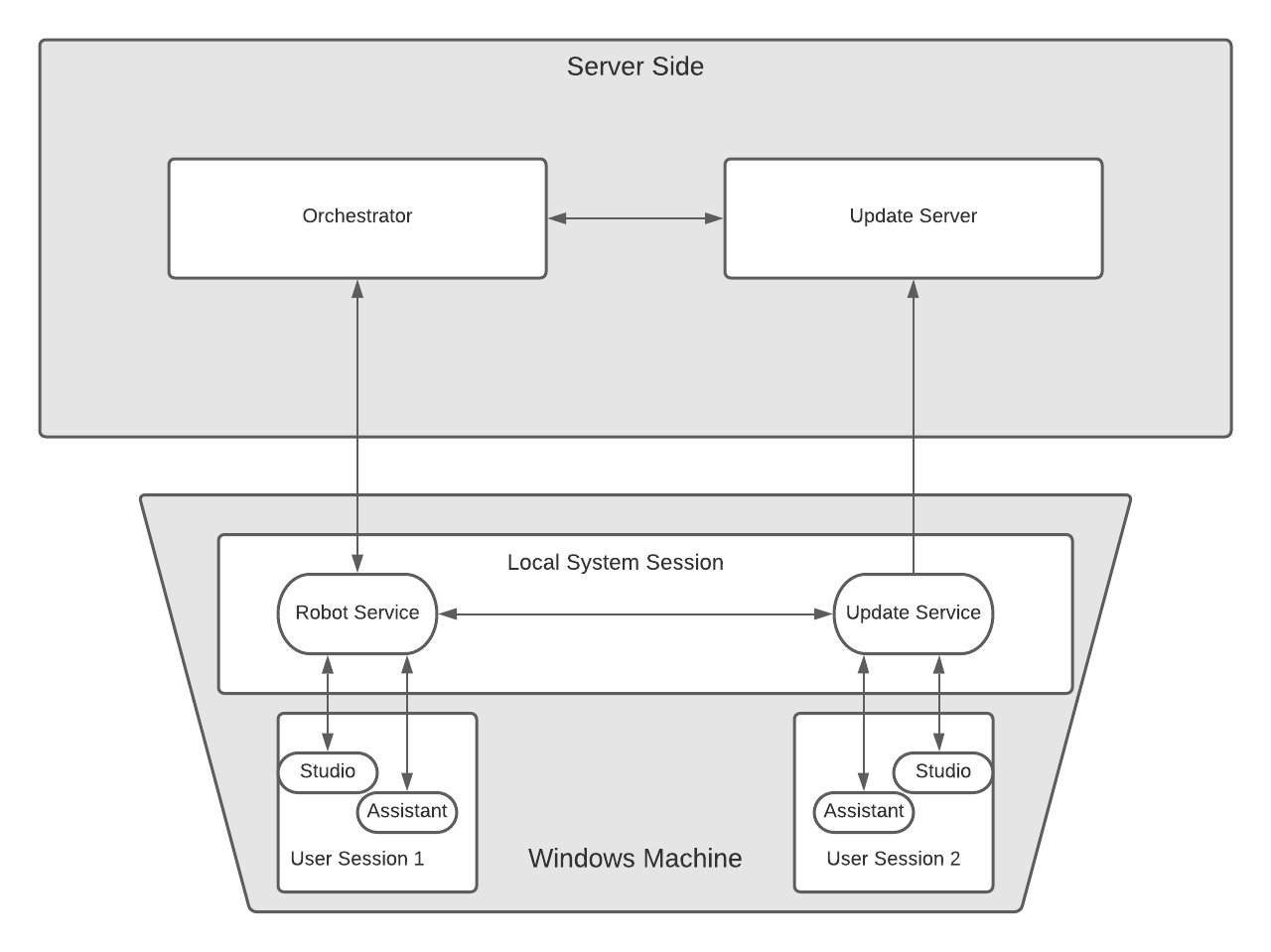 When Robot and Studio are deployed in user mode, sending the update command to one Robot on the machine affects all users on that specific machine. 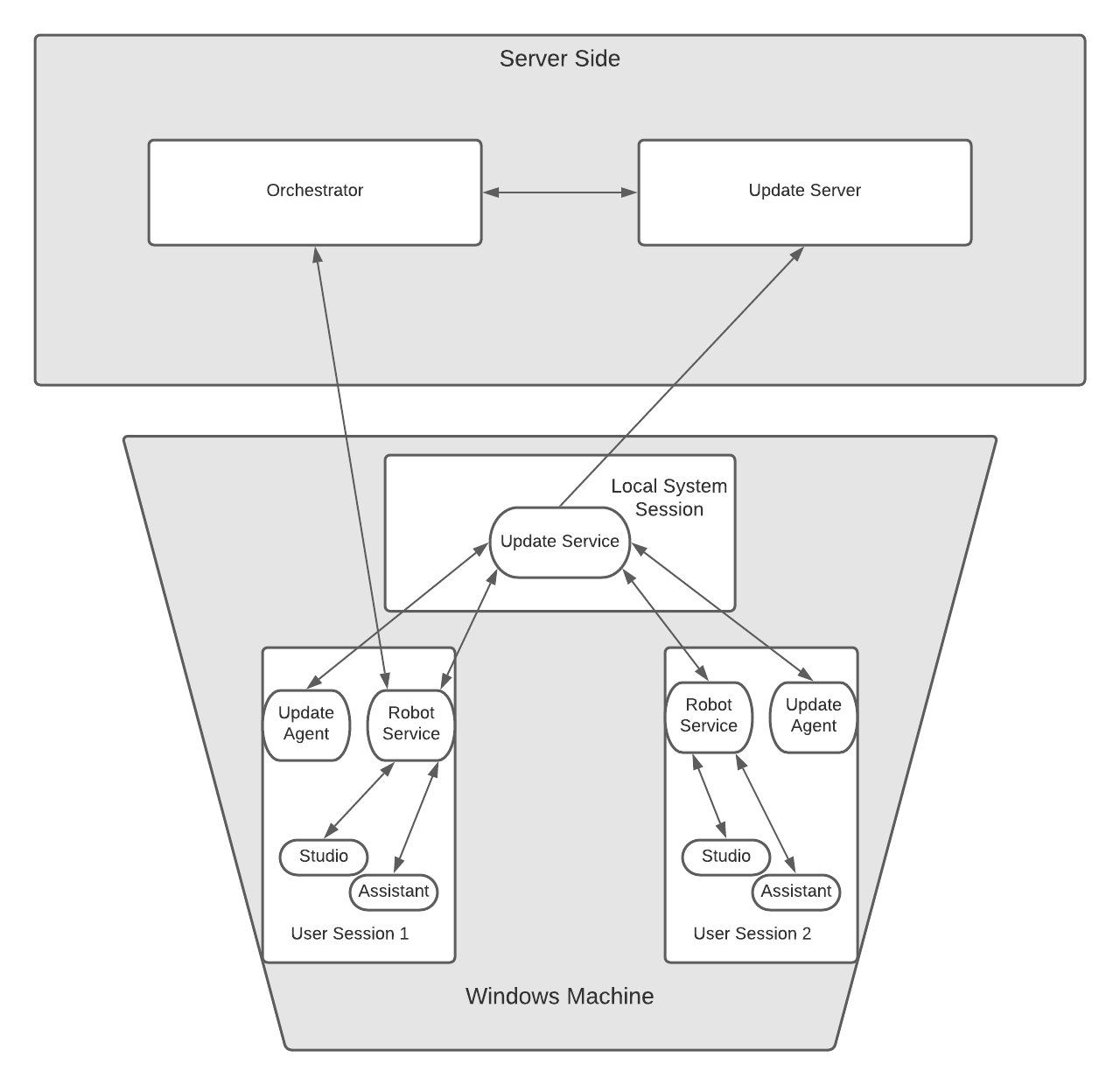 After the update process is completed, Studio and Robot must be started manually.

Configuring update policies for users or user groups allows administrators to control the Studio, Robot and Assistant version for a specific user or user group.

For users that have the Automation Express license assigned, the update policy cannot be edited and is set to deliver the latest enterprise version.

Policies are configured by editing a specific user or group from the Manage Access tab in Orchestrator. 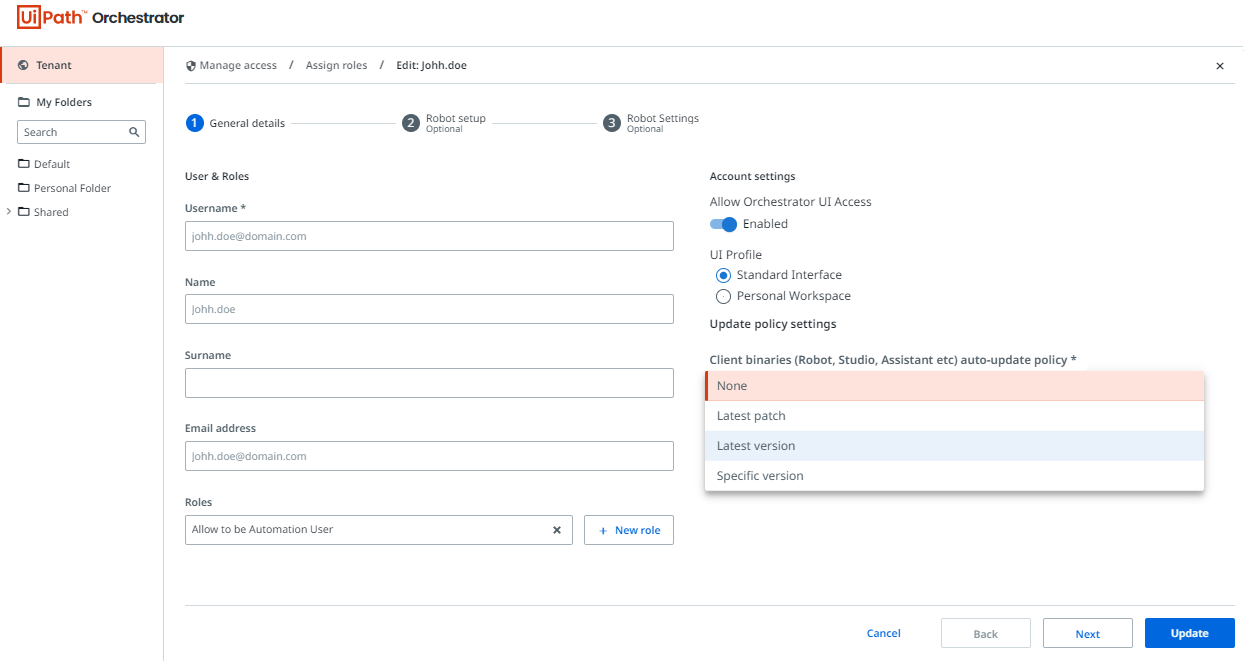 Configuring an update policy for machine objects allows administrators to update the robot versions on all machines connected to Orchestrator using a specific machine key.

To configure the update policies for machine objects, follow the steps below: When using Robot Accounts please note that the machine-level policy is used in order to handle the update.

When creating an update policy, you can choose one of the following options:

In the Orchestrator user interface, the update logs are available for failed and successful updates. Complete logs for the update are found on the machine in the %localappdata%/Uipath/UpdateService/logs file.

When robots are deployed on virtual environments where the machines are cloned, the machine name, guid, drive id, and mac address are the same. This can cause conflicts as Orchestrator receives different update statuses from multiple machines with the same identifiers.
In this scenario, the update status in Orchestrator is shown based on the last machine that connected.
This can also impact orchestrator logs, as multiple machines have the same identifiers, duplicate logs can appear.

The Version status column allows you to check the status of the Robot version for your machines against the associated policy.

The following values are available:

The Version status column on the Orchestrator Machines tab allows you to check the status of the Robot version for your machines against the associated policy.

Elastic Robots are not compatible with the Auto-Update feature. For these, the version status shows as N/A with the "Auto-update is not applicable for this type of machine" tooltip. 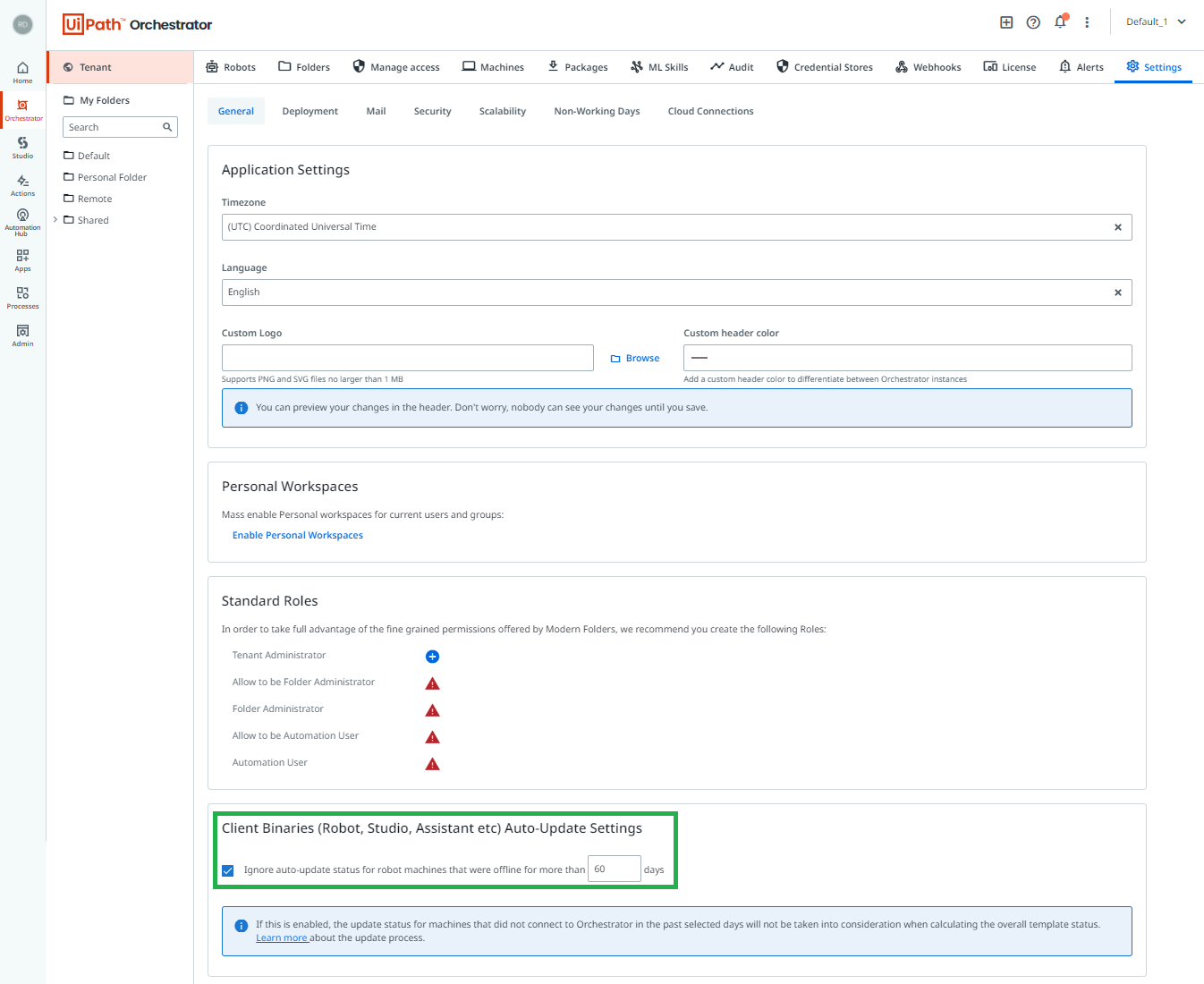 The Version Statuses column on the Robots tab in Orchestrator allows you to check the status of the client component version for your users against the associated policy.

For scenarios in which the robots are sitting behind a proxy, for the auto-update feature to work, additional configuration might be needed. Based on the installation type, proxy configurations can either be inherited from the user-level proxy settings, or set manually by editing the uipath.config file.

1 when the robot is installed in unattended mode, the update agent is not added to the machine.

When an update fails, you can use the Diagnostic Tool to collect logs which can be sent to our Support Team which are used for further investigation on the specific error. 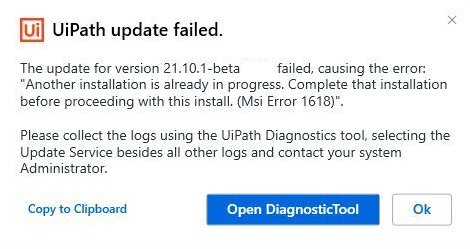 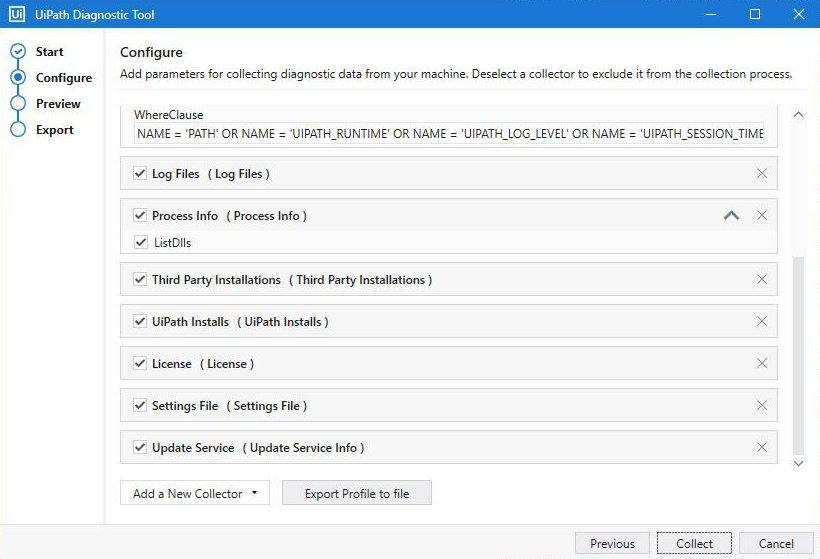