This example explains how to interface the UiPath Process Mining platform with external Python scripts to implement external data processing.

The examples in this section are based on python version 3.

A Python script is created which:

Setting up the Server Settings

Setting up the workspace

Start with creating a minimal script which does not yet do any data processing. This script will be used to verify that your python setup is working, and that your script is being called from the UiPath Process Mining platform.

This example script shows how to generate output that will appear in the script execution log, and how the exit code of a script influences the behavior of the UiPath Process Mining platform.

This script only prints a “Hello world!” message. The script interface uses standard output for data communication from the script to the UiPath Process Mining platform. If you want to include status messages in your script, you should write them to standard error instead.

The example script exits with status code 1. Any status code other than 0 will be interpreted by the UiPath Process Mining platform as an error condition.

Setting up a script data source

Next, set up a datasource table in the app which will call the script. Start with some dummy data, since your script will not yet process the data. At this stage, it will be verified that the script is executed as expected, i.e. that you can see the “Hello world!” message.

You need to get the “Hello World!” example working to be able to successfully complete the remaining steps to set up an interface with an external python script.

Setting up the data source

For this example, we have an application with the a Cases table and an Events table. See illustration below.

The format of the look-up expression attribute should be a list of strings. This is because the csvtable() function will be used to transform the data into .CSV format, which expects a list of (text) records.

Because the listtojson() function requires its input to be of type text, the format of the records in the resulting CSV file depends on the type of the selected attribute (in this case, Amount is of type Currency), and the currently active display format. Here the currency type is converted to double, to make it easier to parse the records later in the python script.

In your text editor, update the script.py file with the following code. 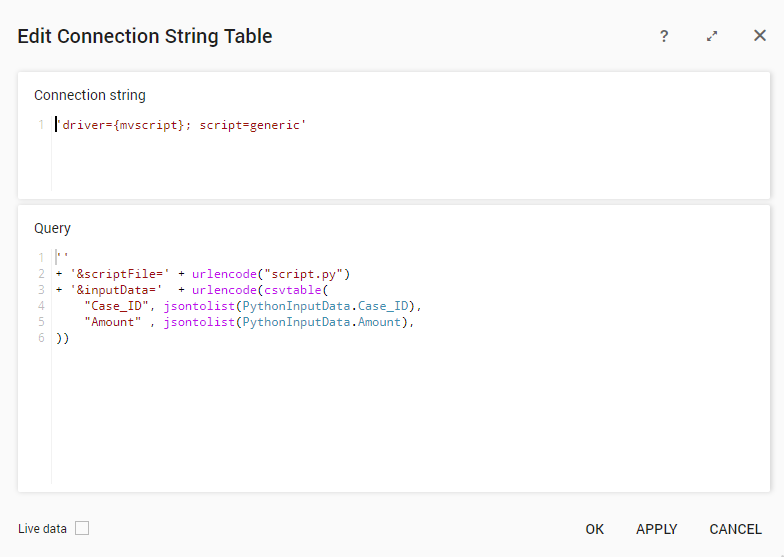 Inspecting the Amount attribute reveals that all amounts have been multiplied by two. See illustration below an example of the output generated by the python script. 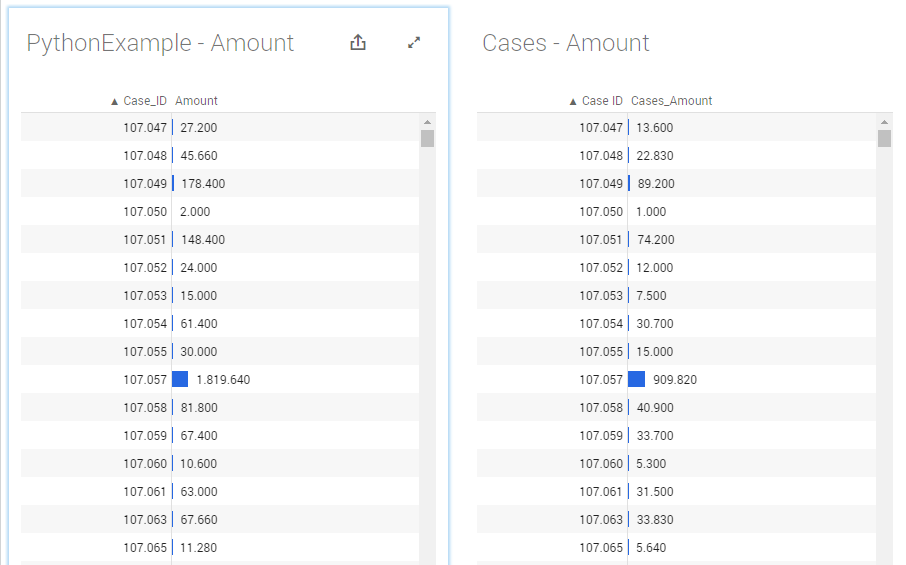