User-based licensing gives a coherent representation between UiPath's commercial model (purchased SKUs) and the licenses available for distribution in an organization. User licenses are managed separately from service/unattended robot licenses and are not tied to a specific tenant; a user can use its license across multiple tenants in the organization.

User license management is enabled by default for all organizations created after the 1st of March 2021.

The user licensing model provides a clear separation between user and robot/service licenses in terms of management. 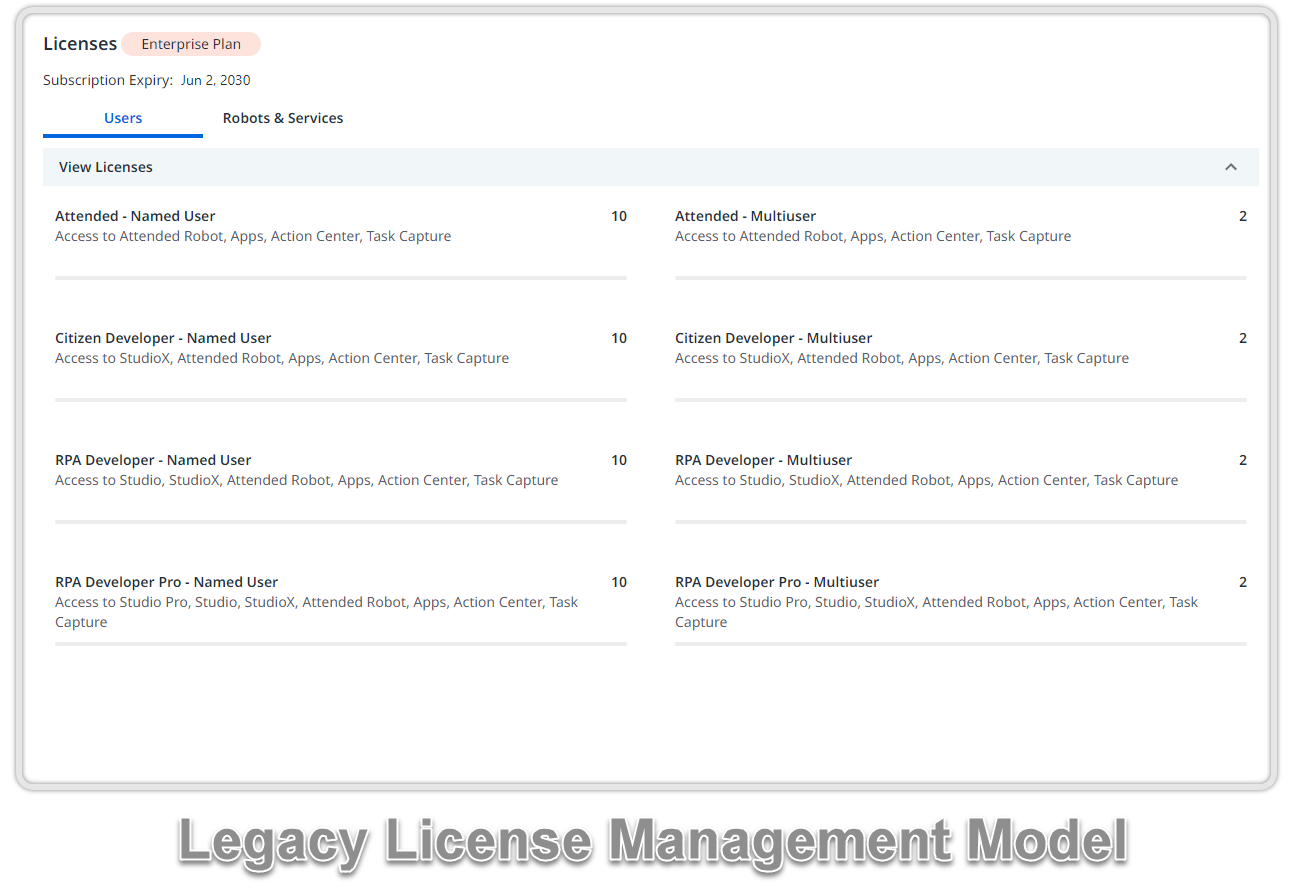 Reverting to the Legacy Model

If user licensing was enabled for your organization, but you do not find it valuable, you can switch back to the legacy licensing model. Follow the next steps to revert to the legacy model.

This model helps you allocate licenses in the organization by providing licenses to a single user or to an entire user group. Using groups lets the administrator allocate a number of licenses to all the members of the group on a first-come-first-served basis, instead of having to assign the licenses one-by-one.

A user can belong to multiple groups with specified licenses and have licenses directly assigned, outside of any group. The resulting state comprises only the licenses explicitly assigned to the user as those take precedence over licenses assigned by group membership.

Direct license assignment is recommended in the following cases: to gain full control over a limited set of licenses or to achieve licensing granularity while keeping access control easy using groups.

A: Say I want to keep access administration easy by providing predefined permissions for typical scenarios in my company while assigning particular licenses to a select few members.

B: Say I want to control what users in a group get assigned a particular license when I have a limited license pool and a much larger number of group members competing for them.

Example
There are 5 Test Developer Pro licenses allocated to the Automation Developers group consisting of roughly 100 members. To avoid relying on the first-come-first-served assignment principle and ensure the right license-user pairing, I will manually assign the license to the 5 users I want.

Group-based licensing is the recommended route for enterprises because license allocation is performed automatically through group allocation rules. Licenses that are assigned at the individual user level can make large-scale administration challenging.

To address those challenges, group-based licensing allows you to allocate one or more product licenses to a group. The pool of licenses assigned to the group becomes available to all members of the group. Any new members added to the group can make use of those licenses. Similarly, upon being removed from the group, a user loses the possibility to use such a license. This eliminates the need for license management on a per-user basis.

Group-allocation rules are configured by an administrator. Unlike explicit per-user license assignment, group allocation does not consume licenses but makes the pool of licenses available to the group members. Users consume licenses on a first-come-first-served principle within the limits of the group license.

These rules can be customized at any point by an organization administrator.

There can be scenarios in which one user inherits multiple licenses by group membership in which case the user will consume the most potent of them. If that is not available, the user consumes the second most powerful.

You can check the license inheritance for a certain user in the Edit License Allocation window.

If an organization administrator explicitly assigns multiple licenses to a user, the user consumes all of them.

Partners that use the same license across multiple customer organizations may request enabling the External License functionality on the customer Organization. This way, partners are able to bring their own license and connect to the customer's Orchestrator services without utilizing from the Customer license pool. Note that this is only possible for developer SKUs & requires Studio to be activated with a standalone license key. Please reach out to our support team or your UiPath contact for more details on how to enable this functionality.