Modern folders have been introduced to improve and simplify the orchestration of automations and offer several benefits compared to classic folders.
In Classic folders vs modern folders you can read more about the differences between these types of folders.

Classic folders will be deprecated in October 2022

Classic folders are no longer the standard for managing automations and have been replaced by modern folders, a better and more feature-rich alternative. For this reason, we have already removed the option of creating new classic folders and we will be deprecating classic folders starting with October 2022.

To assist you in transitioning to modern folders, you can use the Modern migration wizard to easily recreate your classic folder hierarchy and entities in modern folders, preserving all dependencies.

The wizard is only available up to feature removal, which is scheduled in April 2023.

Overview of the migration process

To convert your current deployment, in whole or in part, to utilize modern folders, some entities must be redeployed while others must be recreated entirely.

Here is an overview of what the migration wizard does during and after migration:

While the wizard can greatly simplify the migration process for you, there are post-migration tasks that you need to perform so that your automations can run properly.
Make sure that you have the required knowledge and that you allocate time to perform these tasks before starting the migration.

After running the Modern migration wizard, some tenant-level settings automatically change. These changes are required to used modern folders.

The following changes apply after all classic folders have been successfully migrated:

The Modern migration wizard is not suitable for large deployments, which require dedicated migration tools and strategy.

Preparing for the migration

It is important that you do not make any configuration changes to your classic folder setup until the migration is complete.
Please limit pre-migration checks and changes to the ones laid out below.

Including and excluding folders

Before starting the wizard, add yourself to all of the classic folders that you want to migrate.
Folders that you are not assigned to are not migrated.

Including and excluding classic robots

Before starting the wizard, check that all of the robots that you want to migrate are added to an environment.
Classic robots that are not part of any environment are presumed to not be in use and are not targeted for migration.

If a robot is not migrated, the asset robot values and process schedules for that robot are not migrated either, unless also used by another robot that is migrated.

Following the migration, attended users and robot accounts are automatically assigned the Automation Users role at folder level (in the corresponding folder they are assigned to at migration time). If you have customized the service-level roles or the license allocation rule for this group, we recommend that you remove any elevated roles or extra licenses from this group before proceeding with the migration.

Check that no jobs are running

It is important to make sure that prior to starting the migration no jobs are running.
If you have triggers that would start a job during migration, we recommend that you disable them and re-enable them after the migration finishes.

Before starting the migration, you can check job status from the Folder > Monitoring page of each classic folder to be migrated.

To migrate classic folders to modern folders for a tenant:

Because in modern folders we manage the relationship between users and robots differently and we create the user's robot automatically, you need to map each classic attended robot to the account of the user who uses it.

The Attended users page lists all of the attended robots that were found in the targeted classic folders and their details.
In the Target user account column, for each attended robot found, you must select the account of the user who uses the attended robot, based on the information in the other columns.

If you do not set an account for a robot, that robot is not migrated. The processes associated with that robot will no longer be able to run.

The following are the rules we use to validate your selection when you attempt to map classic attended robots to their users.

When multiple attended robots are mapped to the same target account, the robot username in the modern folder will be one of the usernames of the migrated robots, at random. This can result in access problems when trying to connect to machines.

For unattended robots, you must map them to new or existing robot accounts. Robot accounts are designed for running unattended automations and we recommend using them instead of user accounts.

The Unattended users page lists all the unattended robots that were found in classic folders.

What Automatically generate robot accounts does

With this option selected, at migration time, the wizard attempts to automatically map each classic robot as follows:
i. Looks for an existing user or robot account with a matching unattended username.
If found, it maps the unattended robot to that existing account. If no matches are found, it moves to the next step.
ii. Looks for other classic unattended robots with the same Username that were already mapped to an account.
If found, it maps this robot to the same account. If no matches are found, it creates a new robot account for the classic robot.
New robot accounts created by the wizard have a name of the form Migrated folderName_robotName.

Next steps: If migration was successful, continue with Post-migration setup.

Jobs are not in final state yet

When the migration starts, the wizard automatically terminates any running jobs so that it can run. If, by the time the migration finished, a terminated job remains in the Terminating status and does not reach the Stopped status, migration fails.

If this happens, after 24 hours, we automatically set Terminating jobs to Stopped status. At this point, you can restart the migration.

Restarting or retrying the migration

If the migration failed for some or all folders, you can try again after you resolve the misconfigurations that caused errors.

To restart or retry a migration that failed:

After migration is complete, you must perform the following manual steps to address backward compatibility issues: 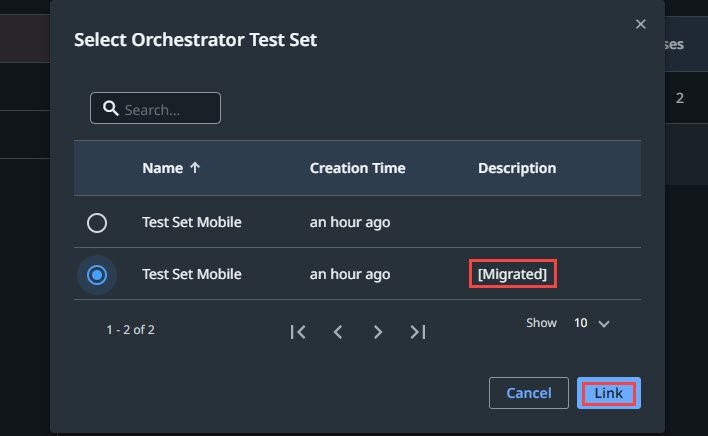 Allow 10 minutes after the migration completes for the wizard to disable the robots from the migrated classic folders. This is required so that licenses are released and can be used in modern folders.

To temporarily revert to using classic folders after running the migration: