OCR services are used for the following purposes:

In production, we recommend calling the OCR using the Digitize Document activity in your workflow and passing the Document Object Model as input to the activity calling the ML model. For this purpose, you need to use the Machine Learning Extractor activity (Official feed).

As a quick convenience for testing purposes, you can also configure the OCR directly in AI Center (Settings window), but this is not recommended for production deployments.

This section details the hardware and software requirements for installing OCR Engines.

OCR engines need access to the Licensing server hosted by UiPath in Azure, on port 443.

If you only want to serve pre-trained out-of-the-box models, you can run an OCR engine on your Windows 10 laptop. Make sure Docker Desktop has 8G of RAM available.

If you want to try training a custom model as a demo on a small volume of data (under 100 documents), you can run the OCR Engine on an environment with a limit of 4GB of RAM. For small cases like this, a GPU for the OCR engine may not be necessary.

OCR Engines are containerized applications that run on top of docker. You cannot run these on the same machine as AI Center on-premises. To run them on a separate machine, the prerequisites installer commands below can be used to set up docker and optionally the NVidia drivers. These scripts should not be run on the machine where AI Center will be installed.

Follow instructions in the official Docker documentation, or run this command:

If this command fails, then you have an incompatible Linux operating system and you need to request your IT to install Docker on the machine following the instructions in the official Docker documentation.

Download and install Docker Desktop. On recently updated versions of Windows 10, you will need WSL2 installed. So when presented with a dialog saying "WSL 2 Installation is Incomplete" please click the Restart button.

When running Data Manager you need to create a working folder for each Docker container (perhaps named workdir for Data Manager) and include the path to it in the docker run command, after the -v flag. When doing this on Windows, Docker Desktop will pop up a notification like the one below. You need to click on Share it to proceed. 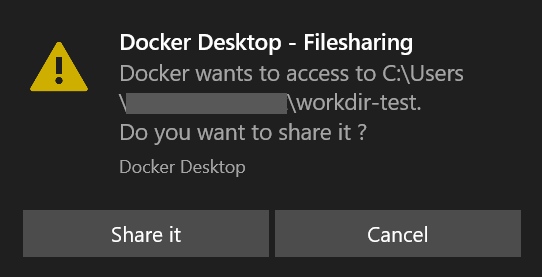 Fill in the path to the folder where you want Docker to hold its files, then run this command and then reboot:

On some systems running the command twice or a system reboot might be required to install all requirements.
Azure Specific: To use the NV-series virtual machines you need to either install the NVIDIA driver before executing the above command, or you can use a Driver Extension from Azure to install the necessary NVIDIA driver according to that tier GPU model.

UiPath Document OCR is available with the following deployment types:

Running on the same machine as AI Fabric

Applicable to both Azure and on-premises container endpoints.

In the case of Azure services, you need to provide both the Endpoint and the ApiKey.

In the case of on-premises container endpoints, API Key is not necessary.

The table below shows how to configure the six supported OCR engine types in both Data Manager and AI Center.