Subscribe
Hey! These docs are for version 2019, which is no longer officially supported. Click here for the latest version, 2022.10!

A job is the execution of a process on one or multiple Robots. After creating a process, the next step is to execute it by creating a job.

Job assignation can be done manually from the Jobs page or in a preplanned manner, from the Triggers page.

The Jobs page displays all the jobs that were executed, the ones still running, and the ones placed in a pending state, regardless of whether they were started manually or through a schedule. Jobs started on Attended Robots from their tray are also displayed here, with Agent displayed as source.

The Jobs page displays job information only from the currently selected folder.

On the Jobs page, you can manually start a job, assign it an input parameter (if configured) or display its output parameter. Additionally, you may Stop or Kill a job, and display the logs generated by it. You can also Restart a job that has already reached a final state, keeping its original settings or changing them. In the event you plan to troubleshoot faulted jobs, more details are available on the Job Details window. For unattended faulted jobs, troubleshooting can be achieved by recording the execution. Details here.

By default, any process can be edited while having associated running or pending jobs. Please take into account the following:

Running jobs associated to a modified process use the initial version of the process. The updated version is used for newly created jobs or at the next trigger of the same job.

Pending jobs associated to a modified process use the updated version.

When creating a new job, you can assign it to specific Robots or you can allocate them dynamically. 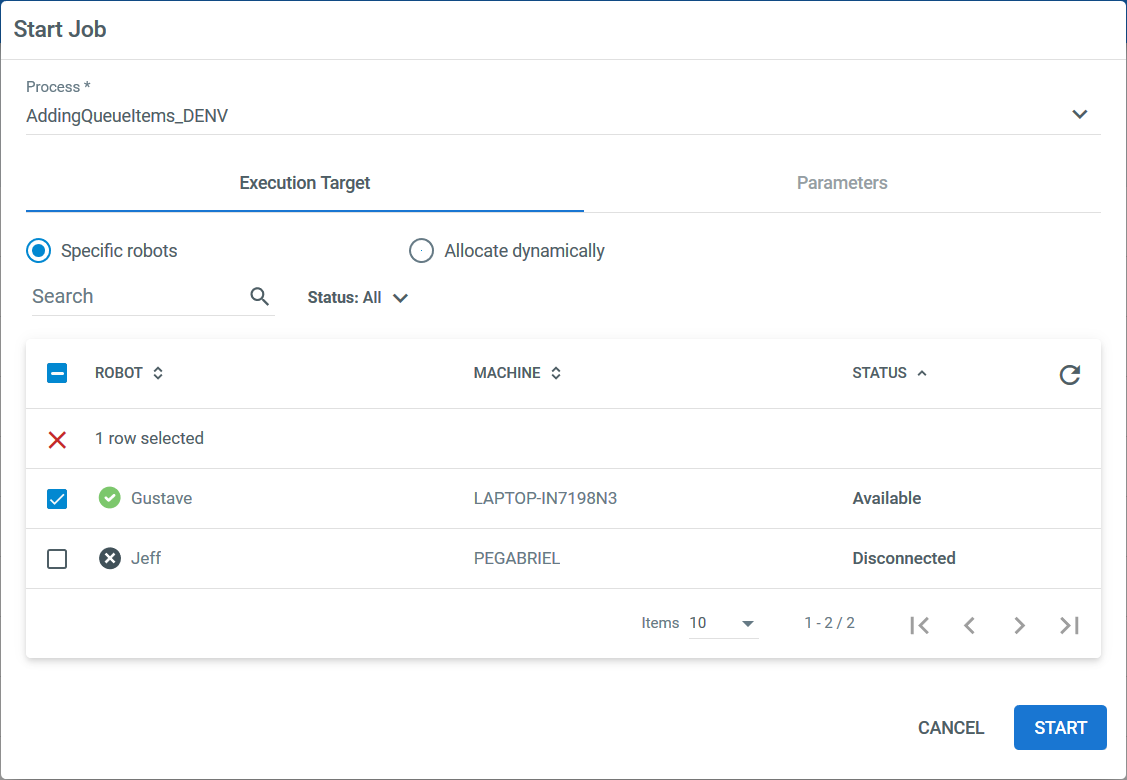 The Specific Robots option enables you to execute a job on a certain robot only.
The Allocate Dynamically option enables you to execute the same process multiple times on whatever robot becomes available first. Jobs are placed in a pending state in the environment workload based on their creation time. As soon as a robot becomes available, it executes the next job in line.
If you define several jobs to run the same process multiple times, the jobs cumulate and are placed in the environment queue based on their creation time. They are executed chronologically whenever a Robot becomes available.

Using the Allocate Dynamically option you can execute a process up to 10000 times in one job.

If a Robot goes offline while executing a job, when it comes back online, its execution is picked up from where it left off.

If you start multiple jobs on the same Robot, the first one is executed, while the others are placed in a queue, in a pending state based on their creation time. The Robot executes the queued jobs in order, one after the other.

For example, in the following screenshot, you can see that three different jobs were started on the same Robot. The first job is running, while the others are in a pending state.

If you start the same job on the same Robot multiple times, and the first job is not fully executed, only the second job is placed in a queue.

If you start a job on multiple Robots from the same machine that does not run on Windows Server, the selected process is executed only by the first Robot and the rest fail. An instance for each of these executions is still created and displayed in the Jobs page.

If you start a job on multiple High-Density Robots from the same Windows Server machine, it means that the selected process is executed by each specified Robot, at the same time. An instance for each of these executions is created and displayed in the Jobs page.

This feature is only supported for Unattended environments. Starting a long-running process on an Attended Robot is not supported as the job cannot be killed from Orchestrator nor can it be effectively resumed.

Processes that require logical fragmentation or human intervention (validations, approvals, exception handling) such as invoice processing and performance reviews, are handled with a set of instruments in the UiPath suite: a dedicated project template in Studio called Orchestration Process, the UiPath.Persistence.Activities pack, tasks and resource allocation capabilities in Orchestrator.

Job fragments are not restricted to being executed by the same Robot. They can be executed by any Robot that is available when the job is resumed and ready for execution. This also depends on the execution target configured when defining the job. Details here.

To check the triggers required for the resumption of a suspended job, check the Triggers tab on the Job Details window.

For unattended faulted jobs, if your process had the Enable Recording option switched on, you can download the corresponding execution media to check the last moments of the execution before failure.
The Download Recording option is only displayed on the Jobs window if you have View permissions on Execution Media.