You can import projects from external sources to conduct testing operations through Test Manager. Use this feature to transfer entire testing projects from different Application Lifecycle Management (ALM) systems to Test Manager.

Importing the project follows a schema that converts external system projects (e.g., testing applications) into a format that can be read by Test Manager. This includes objects such as requirements, test cases, test sets, test results, labels, custom fields, and attachments. The import process is done asynchronously.

Getting the schema version

Results: A ZIP file is downloaded, that has the schema of different testing artifacts in the TMH file. The ZIP file contains the following folders and files:

Make sure to change the data between parentheses with the data corresponding to your Test Case.

If you have a large number of objects to import, split them into multiple files, such as testcases-1.json, and testcases-2.json. We recommend adding a maximum number of 500 files per subfolder.

Who can import projects

Any user having a valid Test Manager License can import projects.

Importing a project in Test Manager

Prepare the exported TMH file and then review the project import details in Test Manager.

Importing the project typically takes around 10-15 minutes, but it might take longer for larger projects.

The imported project shows up in the Projects page, grayed out until the process is completed. 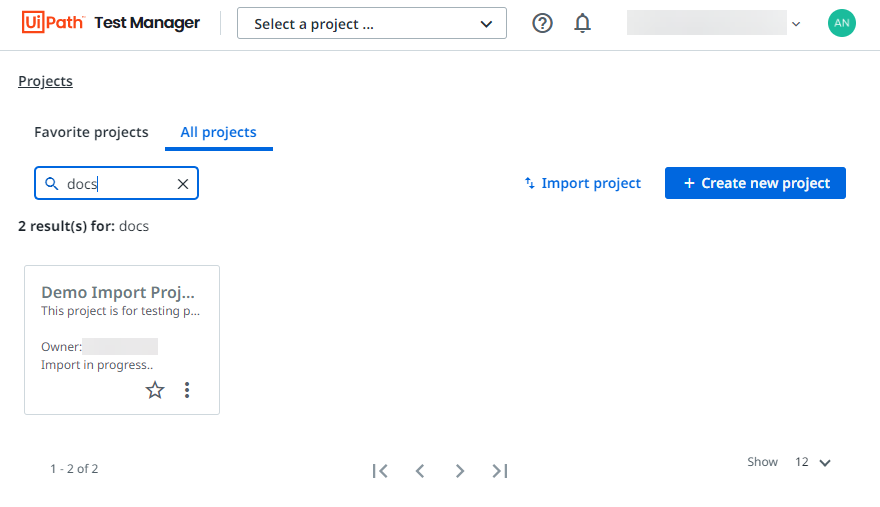 Review the import project report displayed in Test Manager as a notification after the process is completed. The import summary PDF file shows the status of the imported objects. You can investigate individual objects that haven't been imported in object migration log csv file. If the project import fails, contact UiPath Support.