Subscribe
Hey! These docs are for version 2018.3, which is no longer officially supported. Click here for the latest version, 2022.4!

The complete list of keyboard shortcuts for UiPath Studio:

Ctrl + O - Enables you to open a previously created workflow, either the .xaml or project.json file.

Ctrl + L - Opens the folder where the Log files are stored.

Ctrl + Shift + S - Saves all the workflows that are currently open.

Ctrl + D - Ignores the activity that is currently selected by placing it into a Comment Out container.

Ctrl + E - Removes the activity from the Comment Out container it was placed in.

F9 - Marks the selected activity with a breakpoint.

Shift + F9 - Removes all the breakpoints in the currently opened workflow.

F11 - When debugging, enables you to step into a block of activities and executes the first one.

Shift + F11 - When debugging, steps over the execution of a block of activities in the currently selected workflow.

F4 - Lets you choose the UI Framework to record, which can be Default, AA, and UIA.

F5 - Runs the workflow that is currently open.

Pause - Pauses the execution of the current workflow, in both normal and debug mode.

F12 - Stops the execution of the current workflow, in both normal and debug mode.

Ctrl + T - Places the activity inside the Try section of a Try Catch activity.

Ctrl + C - Copies the selected activity or activities to the clipboard.

Ctrl + V - Pastes the copied activity or activities inside the selected item.

F1 - Enables you to access a help topic associated with the currently selected element.

Alt + Ctrl + F - Sets the focus to the search box in the Activities panel to search for an activity.

Starting with v2018.3, the keyboardmappings.xml file has been removed and the possibility to customize keyboard shortcuts has been deprecated.

All supported keyboard shortcuts are stored in an .xml file, which can be found at this location - %appdata%\UiPath\UiPath/keyboardmappings.xml.

Any keyboard shortcut can be changed by editing the .xml document in Notepad and modifying the values between <Key> </Key> and <Modifiers> </Modifiers>.

Modifier keys need to be written as full words, except for “Alt”. For example, write “Control” not “Ctrl”. Multiple modifiers should be separated through an empty space. 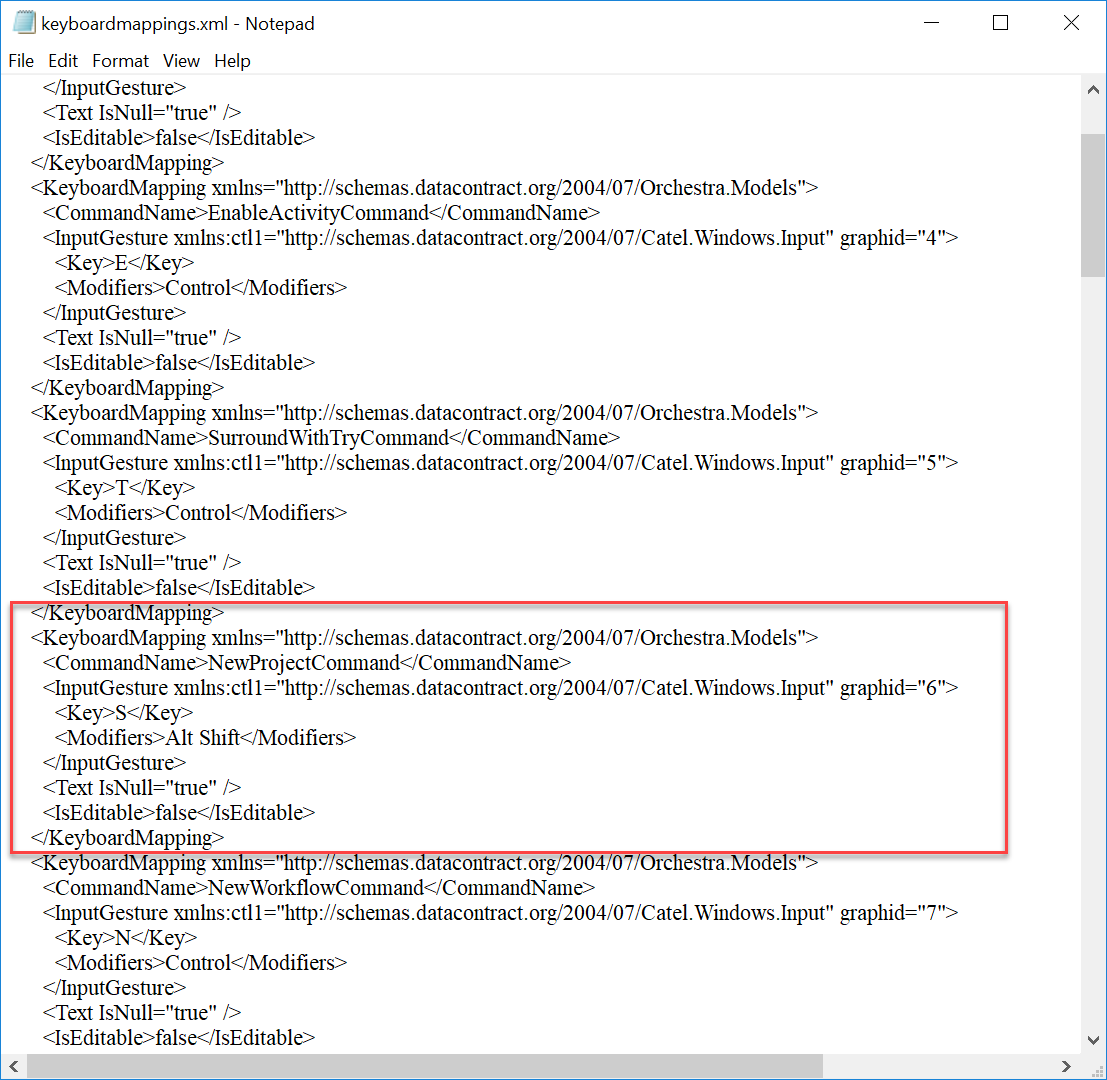 The F2, F3, and F4 keyboard shortcuts from Recording activities cannot be changed.