In our pursuit to increase your automation capabilities, we have made it possible to use UI activities and wizards with Citrix Apps. By installing the UiPath Extension for Citrix on the client machine and the UiPath Remote Runtime component on the Citrix Virtual Apps (formerly known as Citrix XenApp) application servers, you can now create automation projects for Citrix Apps as if they were local applications. Selectors are natively generated for Citrix App elements, and you can use the full range of UIAutomation activities, such as Click, Type Into, Get Text, Extract Data, and more.

More than this, Studio and Robot now have the Citrix Ready certification. Find out what this means for Studio and the Robot.

Before you can start creating processes for Citrix Apps, you need to follow these Configuration Steps.

Opening Citrix Apps is done in a particular way, about which you can read here.

There's also an example you can look over to get a better idea about selectors generated for applications virtualized through Citrix.

After you complete the configuration steps, you can detect individual UI elements from a Citrix App and get selectors for them.

This is what the generated selector for Calculator opened as a Citrix App looks like:

This is what the generated selector for Calculator opened as a local application looks like:

As you can see, the only difference between the two selectors is the isRemoteApp='1' attribute. This gets added automatically when selecting an UI element from a Citrix App.

With the UiPath Extension for Citrix and UiPath Remote Runtime component installed, the following actions are enabled:

The UiPath Remote Runtime is installed on the Citrix application server, while the UiPath Citrix Extension on the client machine. The communication between these components is done through an ICA Virtual Channel. This is the same mechanism used for transmitting data such as audio and video for Citrix Apps, so no additional configuration is needed.

The diagram below showcases the data flow between the client and the server: 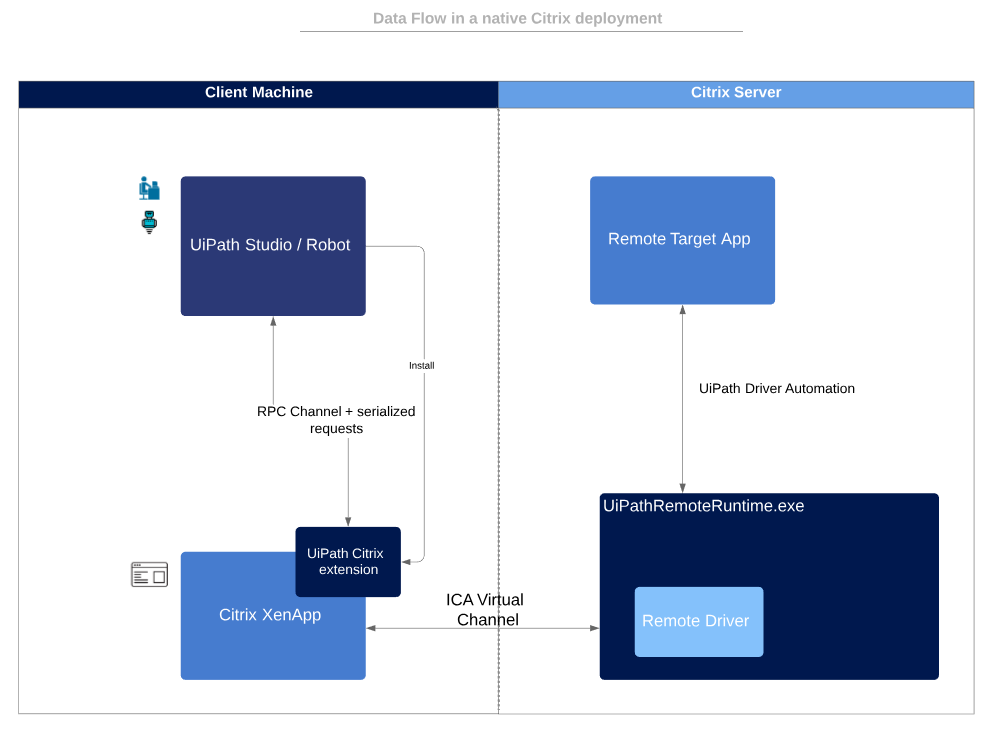