Subscribe
Hey! These docs are for version 2019-fastTrack, which is no longer officially supported. Click here for the latest version, 2022.10!

UiPath Studio allows you to create two types of standalone automation projects: process or library. Processes can incorporate all types of workflows, sequence, flowchart, state machine and global exception handler, while the latter isn't available for libraries. Moreover, libraries can be added as dependencies to automation processes.

When you start a new process in Studio, a folder is created with your custom name to the selected location. Projects are saved in the %USERPROFILE%\Documents\UiPath directory by default. 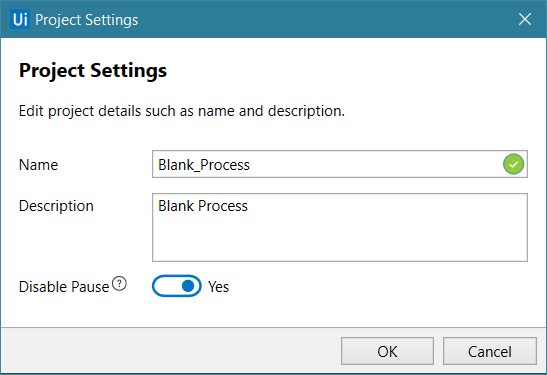 The Project Settings window allows you to change the project’s name and description. Note that the name and description fields are limited to 128 and 500 characters, respectively. The Disable Pause toggle is used for enabling or blocking users from pausing processes in the Robot tray.