Update to the latest version of Process Mining. Make sure to update both the Superadmin and the Dispatcher build. Select this build as the build version for the connector.

Warning: Table … has been reloaded/updated locally.

This warning is displayed when the connector was opened with an input dataset, without reloading the table. The dataset is locally updated in this session, but the input dataset will not have that new reloaded data.

Select Workspace from the Dataset list in the Open Application dialog when opening the connector. See illustration below. 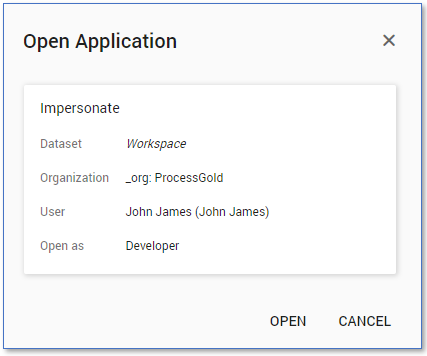 Go to the Data tab in the development environment, right click on the table list and select Reload all data from the context menu. See illustration below. 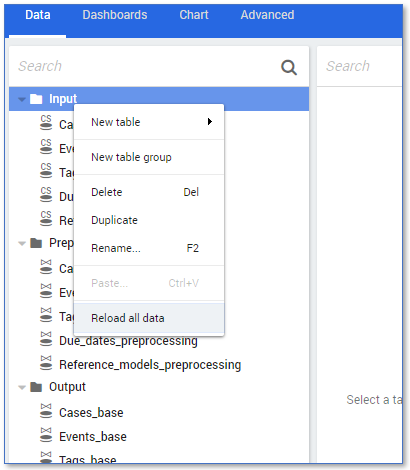 No data visible in the connector

Most likely the connector was opened with an input dataset, or the tables were not reloaded.

Select Workspace from the Dataset list in the Open Application dialog when opening the connector. Go to the Data tab in the development environment, right click on the table list and select Reload all data from the context menu.
If reloading a table does not show errors but also does not load data, check whether the table scope of the table is set to the correct value.
See Table Scope.

A ghost has been created

A ghost is created when an attribute was deleted which still had references, i.e. it was still being used in for example, another expression. You can recognize a ghost by the icon.

Check the references of the ghost to determine the places where the ghost is still being used. These must be resolved before the ghost can be deleted.
See Maintain Application Integrity.

Only one attribute found with all the column names in it

The wrong delimiter is set in the connection string, for example, “,” instead of “;”.

Check the delimiter of the input file and set it correctly in the connection string.
See Connection String Tables

The attribute shows only “Error” as value

The type or the parse format of the attribute is not set correctly.

Either change the type to match the attribute or change the parse format to the formatting in the input file.

Error: The Script Handler for py is invalid, executable does not exist

When setting up a connection to an external datasource using a generic script with the mvscript driver, the script handler needed to execute the script is not defined (properly).

Configure the script handler in the Server Settings.
See How to Use Generic Script Datasources