In this guide, it is assumed there is only one environment.

Before an end user can access an environment and the release that is active on it, data needs to be acquired (e.g. queries on an external database) and calculations need to be cached. The result of a single such cache generation is called an ‘instance’.

Caches can be generated manually or automated. The result of these cache generations can be seen in the Superadmin Released data tab.

To create data instances, you must generate caches which are required to let the end users access the app.

Follow these steps to create a cache for your release.

A new row has been added with your module name and a column for the datarun named after the current date, 1/1 is shown in this column indicating the instance was generated successfully.

If you click on the arrow to expand the row, you see your organization name and some icons in the row, indicating the data generation was successful and this data instance is now active. See illustration below.

Cache generation can also be done periodically (e.g., daily) instead of manually. This is useful when data is queried from an external database, as it will make updated data available for end users automatically.

To set this up, administrator access to the server is needed.

It is also possible to generate caches for specific organizations. Use o=<org> to generate a cache for the specified organization. If o=* is used, caches are generated for all organization in sequential order.

This is only applicable for apps that do not use a connector to generate input data.

Follow these steps to schedule a task to generate caches.

A scheduled task will run periodically to generate caches for all projects for that installation of UiPath Process Mining.

It is recommended to run this task outside of office hours to have as little impact as
possible on your users.

The released data view contains the data instances generated for each module.
Below is a description of the icons indicating the state of an instance.

When a new data instance is created, it will automatically be set to active if it is valid. However, if it has failed, the last valid instance will remain active instead.

Sometimes, it is necessary to look at a more detailed log of the data instance generation. For example, when an error or warning occurred, and you want to see more details.

The log of the data instance generation is shown.

Follow these steps to view a specific data instance.

The project is opened using the data instance you selected.

Sometimes, an instance that is considered valid can still contain a problem. In this case, it is possible to block it to ensure it will be deactivated and end users cannot access it anymore.

Follow these steps to roll back an active cache.

Marking a data instance as fixed

When an issue with a blocked or failed data instance is not actually a problem, it is possible to mark it as fixed and reactivate it.

Follow these steps to mark a data instance as fixed.

When using the context menu (right-click on an instance) in the Released data tab, each of the options opens a dialog named Select Instances. See illustration below. 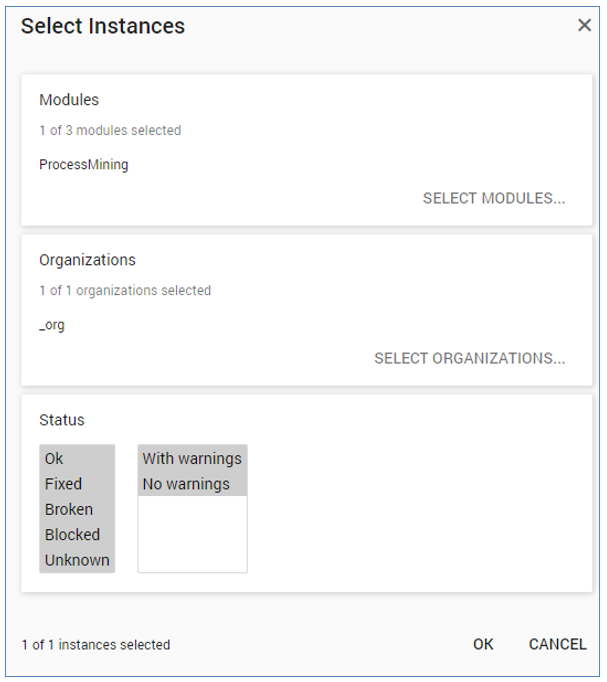 In this dialog, you have the option to select the modules on which the selected operation is applied. Some actions, like Open, require a single instance to be selected, while others allow multiple to be selected, like Show Logs. Depending on where you right-click in the grid, different modules will be initially selected in the Select Instances dialog.

Follow these steps to select specific modules for the current action you are executing.

The modules you have selected are indicated in the Select Instances dialog.

It is possible to increase these numbers to whatever suits best. Additionally, when a valid instance is created, all invalid instances more than a week older will be deleted.

The amount of valid data instances and error instances kept is updated to the settings that were chosen. The next time an instance is generated these new settings will be used to delete old instances.

It is possible to receive emails when your cache generation fails.

Follow these steps to set up automated failure emails.

You can export the data contained in an instance as a development dataset. Developers can use these datasets, so they do not need to acquire data (e.g. by running queries) themselves.

Follow these steps to export a dataset for development.

The exported dataset is added to the datasets in the Development data tab.