Subscribe
Hey! These docs are for version 2018.2, which is no longer officially supported. Click here for the latest version, 2022.10!

One single Orchestrator instance can simultaneously run up to 1,000 Unattended robots or up to 10,000 Attended ones. For the recommended deployment for 10K Robots, please check the information presented here.

Orchestrator supports the multi-tenancy concept as well. The approach is called “Shared Schema”, meaning that multiple tenants can share the same database and the same database schema. All tenant related data is unambiguously defined in each table by its own TenantId.

The UiPath Server Platform has the following logical components, grouped in three layers: 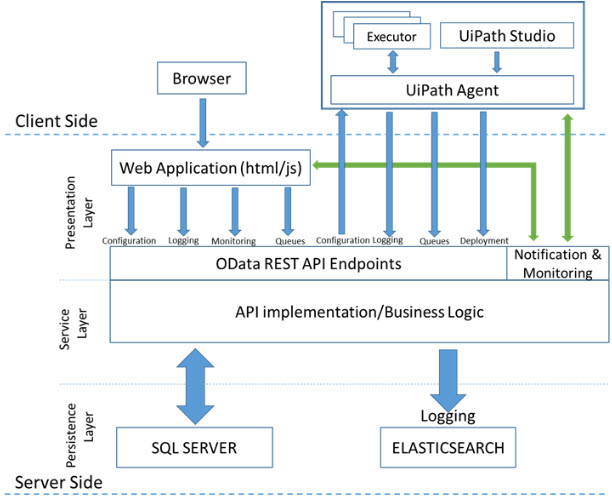 The Web Application is the visual layer of the Server Platform. The user interacts with its web pages in order to perform various actions: creating Robot groups, assigning packages to them, analyzing logs per Robot or per process, starting and stopping the Robots.

Besides the web pages, Orchestrator also contains a service layer which exposes a REST API mainly consisting of OData endpoints. REST API is consumed by both the Web Application and the Agents. The Agent is the supervisor of one or more Robots on the client computer.

Components of the Persistence Layer:

Messages logged by the robots can be stored in the SQL Server, in the Indexer Server, in both of them or in none.

The Indexer Server uses the Elasticsearch (an open source project) full-text search engine. All messages logged by Robots (using activities like Log Message or Write Line) are sent through the Logging REST endpoint to the Indexer Server where they are indexed for future utilization.

For a better distribution of resources, it is recommended to install the Indexer Server on a separate machine than the one on which SQL Server is installed.

On the client computer, a running process is represented in the above diagram as an Executor. There can be several business projects running simultaneously, each having a corresponding Executor. The UiPath Agent (a Windows service) is the single point of contact for all Executors, through which all messages are logged into the Orchestrator Service, which processes them further (Indexer Server or SQL Server Database or both).

A Robot represents an association between a machine name and a username. It can manage multiple executors at the same time. On systems which support multiple interactive sessions running simultaneously (e.g. Windows Server 2012), there can be multiple Robots running at the same time, each in a separate Windows session using a unique username. We call this feature “High-Density Robots”.

The UiPath Agent is also responsible for sending the status of the Robot (e.g. SubmitHeartBeat endpoint) and downloading the required version of the package to be executed.

The communication between the Agent and Orchestrator is always initiated by the Agent. In the notification scenario, the Agent opens a WebSocket channel which is later used by Orchestrator to send commands to the Robot (Start, Stop, etc.).